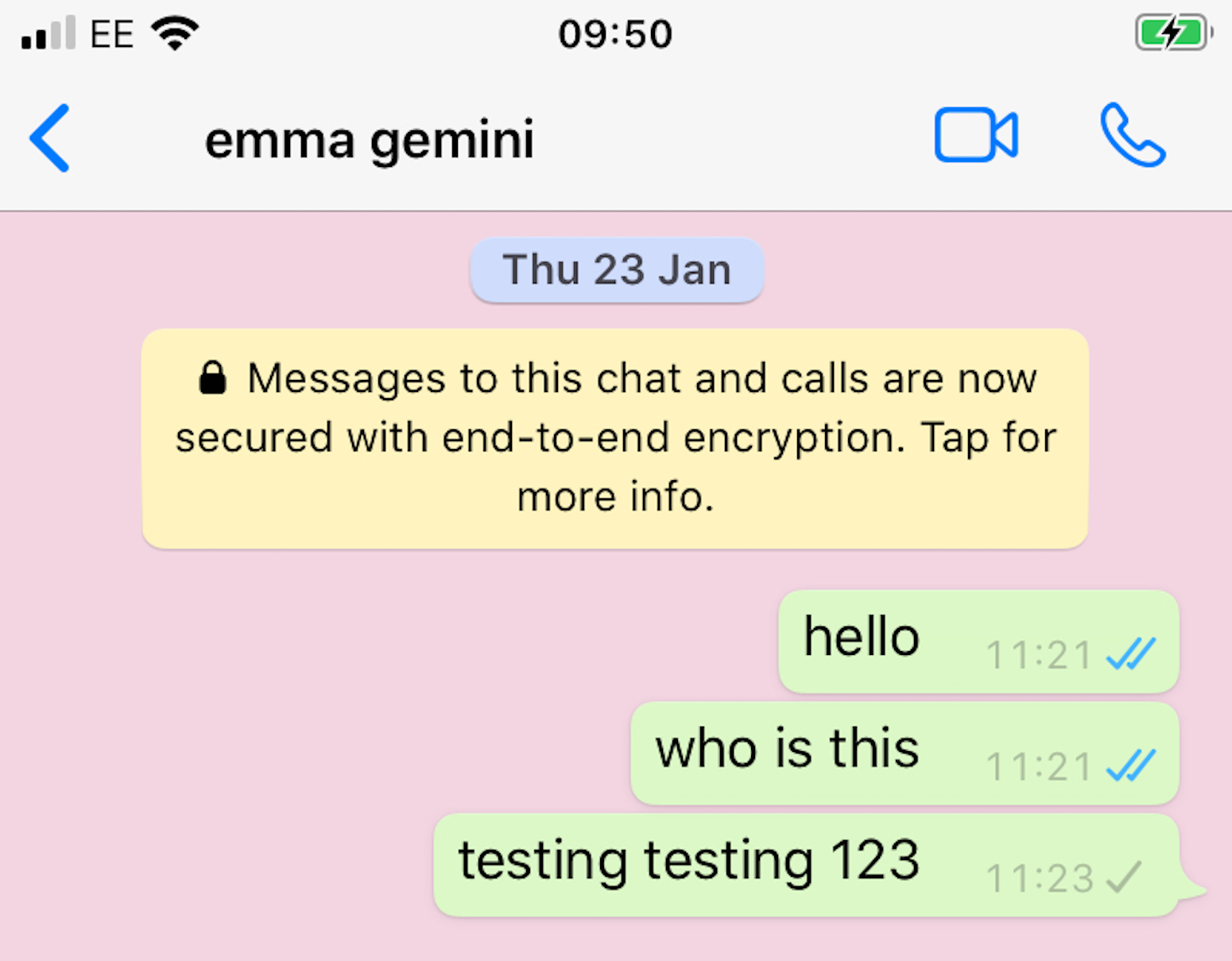 “Omg let’s swap numbers!” you say to the girl in the club toilet who, in passing, said that she liked your fluorescent fanny pack. “Sarah Toilet” you name her, then never think of her again. “Yes, we must hang out,” you nod enthusiastically to the guy in the Uber pool, punching his number into your phone. Again, you forget he exists a mere ten minutes later. “I would love to collaborate with you on a zine,” you say to someone, somewhere. Sophia something? You add her number to your contacts list. Three months later, still no zine.

If you own a smartphone, chances are you’ve had the same contact list for a number of years. As time goes on, the names stack up, but still you just DM the same few friends on Instagram/WhatsApp/whichever platform you hate the least. And God forbid you’d ever use your phone to actually call anyone other than your mother. Back in the day, exchanging numbers might have meant something. You might have actually called someone’s house phone for a 30-minute conversation. But in the era of social media, phone calls to people you barely know are almost considered a faux pas.

But all of this got me thinking: Social norms are there to be broken. And who knows? Maybe all these names in my phone—“Esme Tinder,” “Kaya Club,” the vague and innocuous “Em”—shouldn’t be viewed as strangers but opportunities for friends I haven’t made yet. There must have been a reason I added them to my phone in the first place. And so, one afternoon, I decide to give a bunch of them a call so we could “chat” in order to “reconnect.” What could go wrong?

First, I whittle it down to a shortlist. As someone who uses their phone a lot for work, I have to be careful not to call “Este Haim,” “Jamie Klaxon,” or “Lindsay Lohan PR” because that would be unprofessional. Instead, I go for the names that I have literally no recollection of adding. The names that I cannot for the life of me conjure up a face for.

To begin with, I pre-warn a few of these people with a message, but this doesn’t go too well. A few of them have obviously changed numbers because my WhatsApps don’t go through. Others ignore me. And one contact, “Emma Gemini,” literally blocks me without replying.

So then I go straight for the jugular. The first person I call, “Chris,” picks up after two rings. “Hello?” they ask, with the confident tone of someone who actually uses their phone. I explain that I’m calling people on my contacts list, people I don’t remember, and does he happen to know how we met? “Er, no mate sorry. Daisy did you say?” There’s a pause. “Camden?” I haven’t been to Camden in years, but it’s a possibility. “Sorry I’m at work and there are customers, but… good luck!” he hangs up before I have a chance to piece anything together. Even in that brief 30-second conversation, I cannot imagine why me and Chris would have swapped numbers.

I call a few others. They don’t pick up. The next person who does is someone called “Alex T.” I mentally scan all the Alex’s I know. Did I live with an Alex T? Hook up with an Alex T? Have me and any Alex T ever been friends? “Ha, I think we swapped numbers on Tinder but, like, ages and ages ago,” she says (that must account for the “T”). “I remember you because you were really forward, also I follow you on Instagram so…” Why did we stop speaking? “Well I’ve got a girlfriend now. But also I think that happens a lot on Tinder. You give your number to someone then it just fizzles out when neither of you make the first move.”

I like the sound of Alex; we could have been friends. You never know, we could have been lovers in another life, had things worked out differently. But they didn’t, and when we say our goodbyes after exactly one minute and 16 seconds, I get the feeling we won’t speak on the phone again. 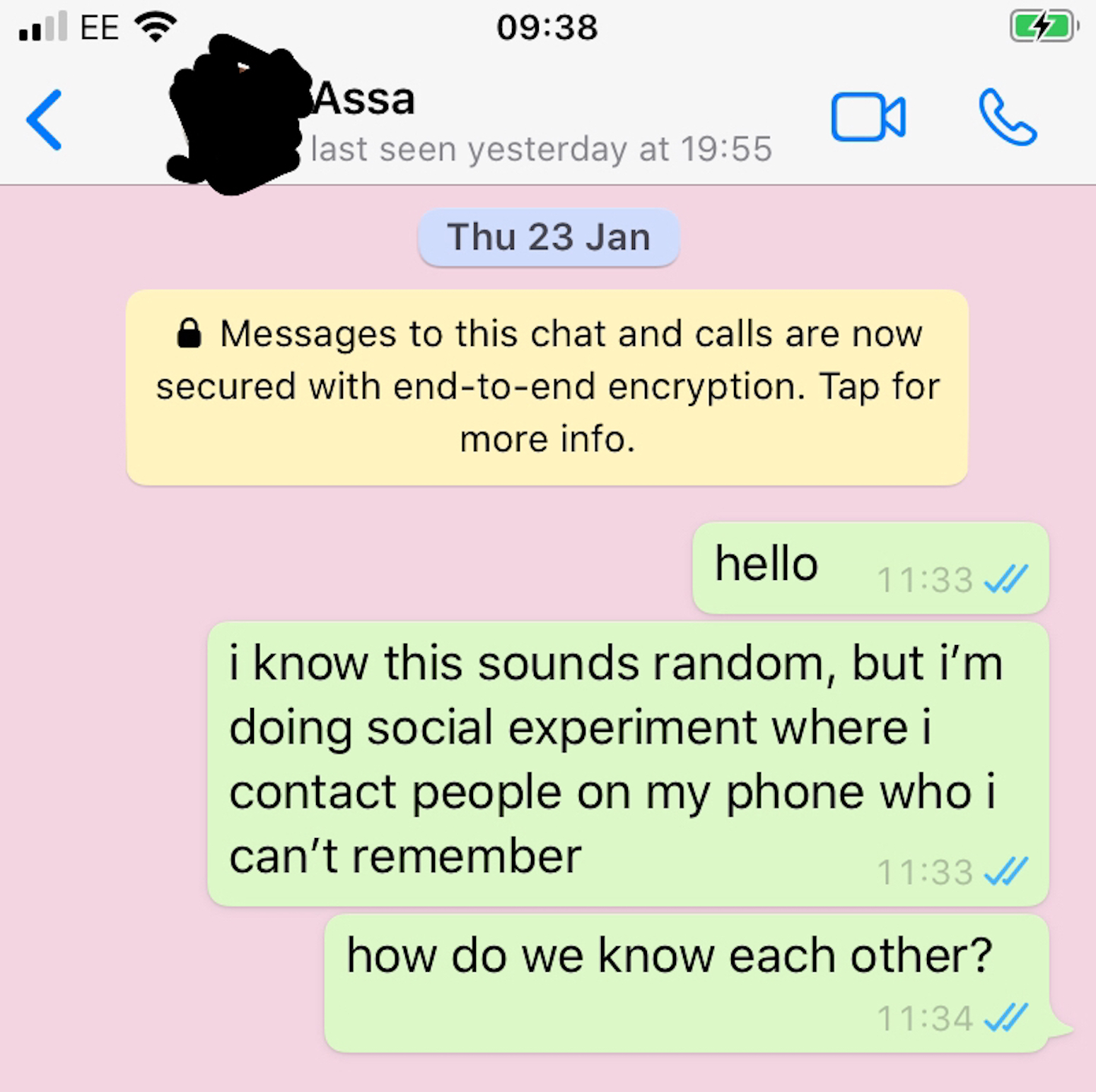 Next up is “Carter,” which sounds like someone in an American high school rom com from the 2000s. How could I ever know a “Carter?” But just as he picks up, a few vague memories start swimming back. Stoke Newington? 2011, 2012? Did we… did we sleep together? For a moment I feel bad, like what if someone I’d slept with couldn’t remember me? “Daisy… Daisy…” he says, as if racking his brains after I explain why I’m calling. Wow he really can’t remember me, can he? “Were you friends with Rachel?” I was friends with Rachel. I make my excuses and hang up. Fuck you, Carter.

By this point I’m getting tired. People don’t seem to want to speak to me, and when they do, it doesn’t really add anything to either of our lives. The last person I try is someone called “Spinner,” who I wish I remembered but honestly I don’t. They sound like the type of person who might send me 3 a.m. WhatsApps about 2-for-1 deals on Stardawg. “Yeah?” They pick up. I explain what I’m doing. “How did you get my number?” they reply cagily. I explain again. They hang up.

I wish I could say I learned something valuable and life-affirming from this experiment—that my worldview had expanded a little, that I forged meaningful connections with people who nearly passed me by. If this was a TV show, maybe I’d become best friends or lovers with one of these forgotten contact names. People at parties would ask how we got together and we’d look at each other knowingly and laugh. I’d start by going “Well…”

But none of that happened. The phone conversations mainly felt brief—a touch uncomfortable. And if anything it made me realize that the friends you make are the ones you make an effort with, and who make an effort with you. It’s good to have a filtration system. Anyone who gets through that filtration system should be there, and vice versa. I’m not suddenly going to get back into having intense phone calls either. They’re long. See you in the DMs, or, you know, in real life.