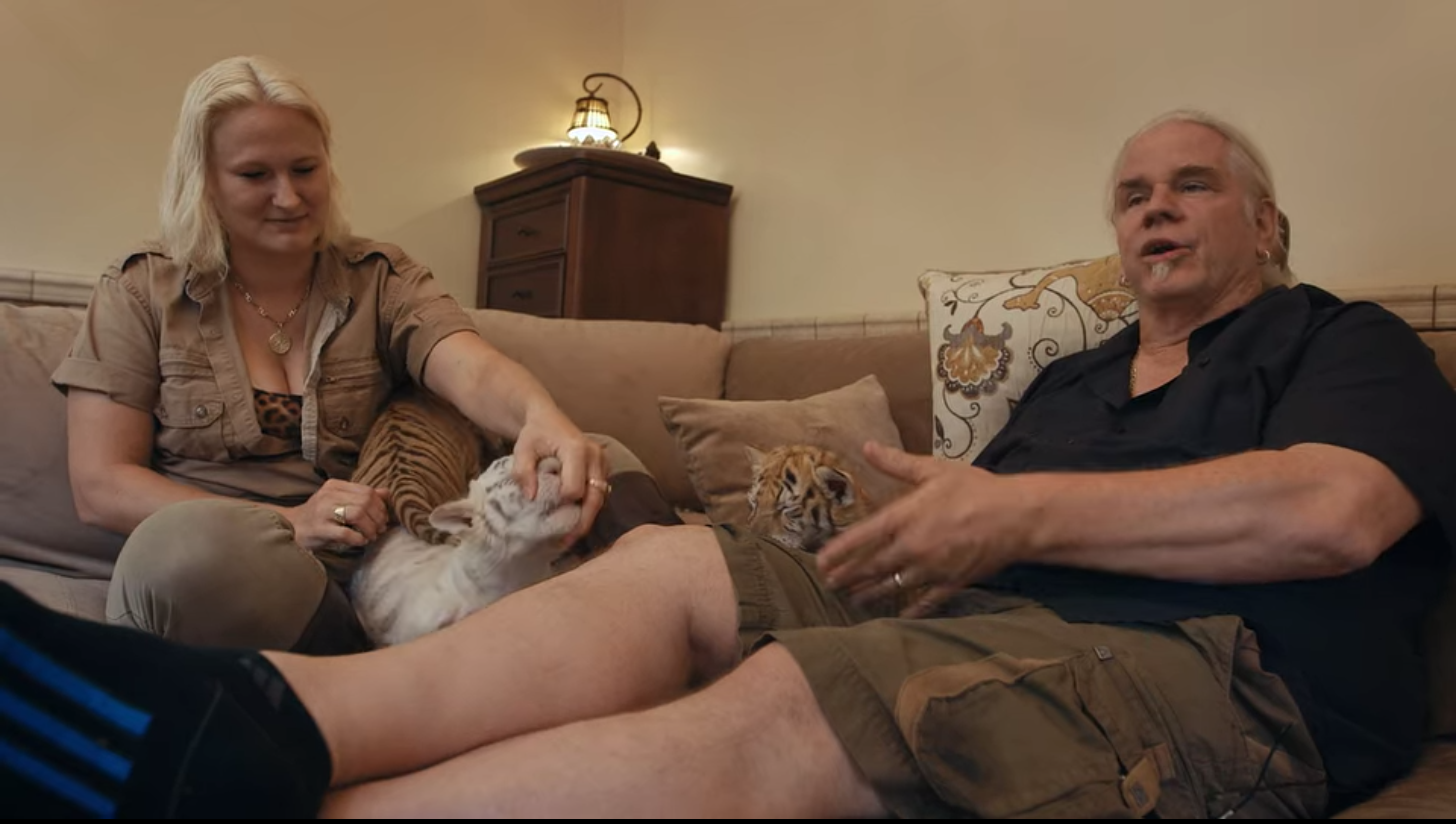 Shut-in Indians around the world had a brief moment of unity when we tuned into Tiger King, the highly addictive Netflix limited series that confirms that big cat owners are very weird people. In a show that has a murder-for-hire plot, a three-way gay marriage, a Walmart truck full of rotten meat being served to both animals and zoo visitors, a pierced and padlocked penis, and so much other potential for further exploration you have to wonder if the whole thing was engineered to create a Marvel-size universe of spin-off content, it’s hard to focus on just one aspect of the show. It’s particularly difficult to not fixate on Bhagavan “Doc” Antle, the mentor of the show’s main character, Joe Exotic.

The second episode of the show delves into Antle and his Myrtle Beach-based T.I.G.E.R.S. wildlife refuge, now called Doc Antle’s Myrtle Beach Safari, which appears to operate as a cult. As described by Barbara Fisher, a former employee, women who worked for Antle were kept in horse stall-like accommodations, forced to change their names (often to Asian- or Hindu-sounding names such as Ranjnee, Moksha, and China), and pressured into undergoing breast enlargement procedures. There is also evidence of rampant animal abuse, as Antle is suspected of euthanizing cubs once they are no longer profitable as photo props (as seen in this 2019 Instagram clip featuring a tiger named Casanova).

Born in California to a wealthy family who ran an industrial farm, Mahamayavi Bhagavan “Doc” Antle got a Hindu name from his mother, who “nurtured an interest in Eastern philosophy,” as reported by Rolling Stone in 2015. Antel said his childhood aspirations were to be “between Rambo and the Dalai Lama”; in truth, Antle is more like a cross of Florida Man (he’s based in Myrtle Beach, South Carolina, but still) and that breed of white bohemian that is oddly obsessed with turmeric, yoga, and pretending India is a mythical place. Antle previously went by the name Kevin, as described in a 2001 article in Nashville Scene and explained on his blog, where he says he used this name in school due to “difficulty pronouncing his unusual name” (to which I say, I feel you, man). He earned a Chinese medicine degree in China, which is why he calls himself a doctor, and he spreads his knowledge in places such as LigerLiger.com, where he wrote a defense of cross-breeding wild animals called “Ligers are Grrrrreat…” Antle is a perfect example of how Indian culture is misappropriated and distorted, furthering the cycle of exoticizing India and promoting troubling archetypes.

In case this sounds like one aggrieved Indian’s account, take it from a professional: There is a history, and even a name for this phenomenon of looking like a Kevin but adopting a name from the Indian subcontinent. French psychiatrist Régis Airault coined the term “India Syndrome” in 2000 in his book Fous de l’Inde, the title of which translates to “Crazy About India.” Recalling his time serving in the Mumbai consulate, he recounts fellow Frenchmen losing their shit on their path to spirituality, who were seeking a “a cultural space that is pure and exotic, where real values have been preserved,” according to the Cult Education Institute.

There are plenty of historical examples: There’s Richard Alpert, the icon of 60s psychedelia who took a journey to India and returned to the US as Ram Dass, where he became known for his work as a proponent of LSD, and by my measure, also seemed like a legitimately cool dude. But for every Dass, there’s some other white guy with a fresh new Hindu name, participating in bad behavior like tiger cub hoarding and abuse of women under the guise of being “enlightened.” Another example is Christopher Sandborn, who changed his name to Mukhande Singh and became known for selling unfiltered, unsterilized water as a new health trend in 2017.

In the 80s, there was Yogaville, an ashram community in Virginia started by Swami Satchidananda, the guru who opened Woodstock. Satchidananda blessed Yogaville by dumping holy water onto a building dome while leaning out of a helicopter, as the Washington Post reported in 1986. Unbelievably, Antle makes an appearance in the story, as he performed a magic show at the temple dedication ceremony and “brought along the two tigers he has used in Exxon commercials,” further perverting his “Indian” aura and purported closeness with nature.

As an Indian person watching Antle’s saga on Tiger King, there’s little to relate to in terms of his Indian-ness, aside from the urge to call himself a doctor. Indian parents would be horrified at the lack of homework done: There is not even a consensus within Antle’s family as to what the name “Bhagavan” means. Fisher, the former employee, says it means “Lord”; Antle says it means “you’re a friend of God”; his son Kody (who they call “Real Life Tarzan“) says it means “master of the universe,” an “all-knowing, all-seeing kind of guy.” (Fisher appears to be most accurate.) This is to say that Antle’s actual connection with Indian culture is laughable; he has an Indian name, and gave new Indian names to his possibly captive white employees, but the similarities end there. (Though, to be fair, I’ve never been part of a cult led by a real Indian, and there are lots.)

So while we’re stuck inside for the next few months, possibly shifting our collective worldview based entirely on streaming content, I’d just like to remind you that this man may be a predator, and an animal abuser, and have a similar vocal delivery to Kevin Malone from The Office. But one thing he is not, for sure, is Indian.